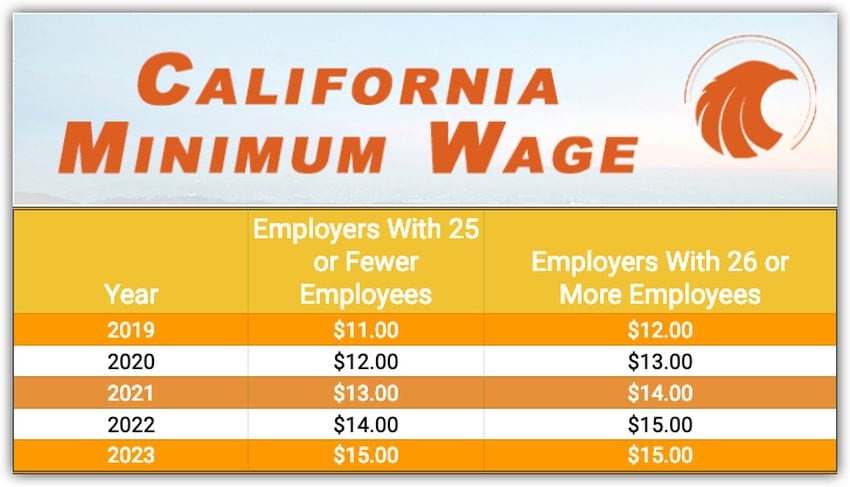 California ranks among the 10 richest federal states in the United States, and that’s a fact. California is also home to major industries such as film, agriculture, technology, tourism and of course sports. So, all of this tells us that the state’s economy is strong and California is a great place for anyone looking to find a job and earn a decent amount of money, no matter what job you do. Currently, The Golden State has the highest state minimum wage as does Washington D.C. and Massachusetts. If you don’t know what the minimum wage is, you can read it below. Also, we will present some interesting information on the minimum wage in California, and the historical trend of growth. In essence, below you will be able to read everything you need to know about minimum wage in The Golden State. Well, if you’re ready, let’s get started.

This means that the minimum wage is constantly increasing and that this trend will continue in the years ahead. Particularly significant is the fact that from 2017, there is a law that stipulates the minimum wage in relation to the number of employees. For example, if an employer has fewer than 25 employees, the law prescribes a slightly lower wage, while for those with 26 employees or more, the minimum wage is slightly higher. We will compare the case from 2017 when for an employer with fewer than 25 employees this figure was $10.00 per hour, while in the other case it was $10.50 per hour.

It is important to clarify that there are different types of minimum wage, such as local, state and federal wages. The federal minimum wage is currently $7.25 and is a figure below which neither state nor local minimum wages should go. When it comes to the latter, local wage means a minimum at city level, and state wage is a minimum at the level of a federal state. This system is very convenient and brings overall progress to the state in terms of employment, reduction of crime rates, reduction of income inequality, as well as poverty of citizens.

Minimum Wage in California in 2019

When it comes to California, we said that this is one of the richest federal states in the United States. Also, we mentioned 2017 as a key year when it comes to raising the minimum wage. The year 2017 is significant because since then both categories (under 25 and over 26 employees) have a minimum wage in excess of $10 and have been increasing every year since. For example, in 2018, the ratio was $10.50/hour versus $11.00/hour. When it comes to 2019, these numbers are further increased. Specifically, as of January 1, 2019, the official minimum wage in California is $ 11.00 per hour for employers with up to 25 employees, while for those with over 26 employees, it is $12.00 per hour. Given that there is little time left until the New Year and the new increase, it is important to mention what the minimum wage will be in 2020. Given the proportional increase, next year these figures will increase by $1 in both categories, and the same trend will continue beyond 2020. This means that as of January 1, 2023, the minimum wage for the first time for these categories will be $15.00 per hour.