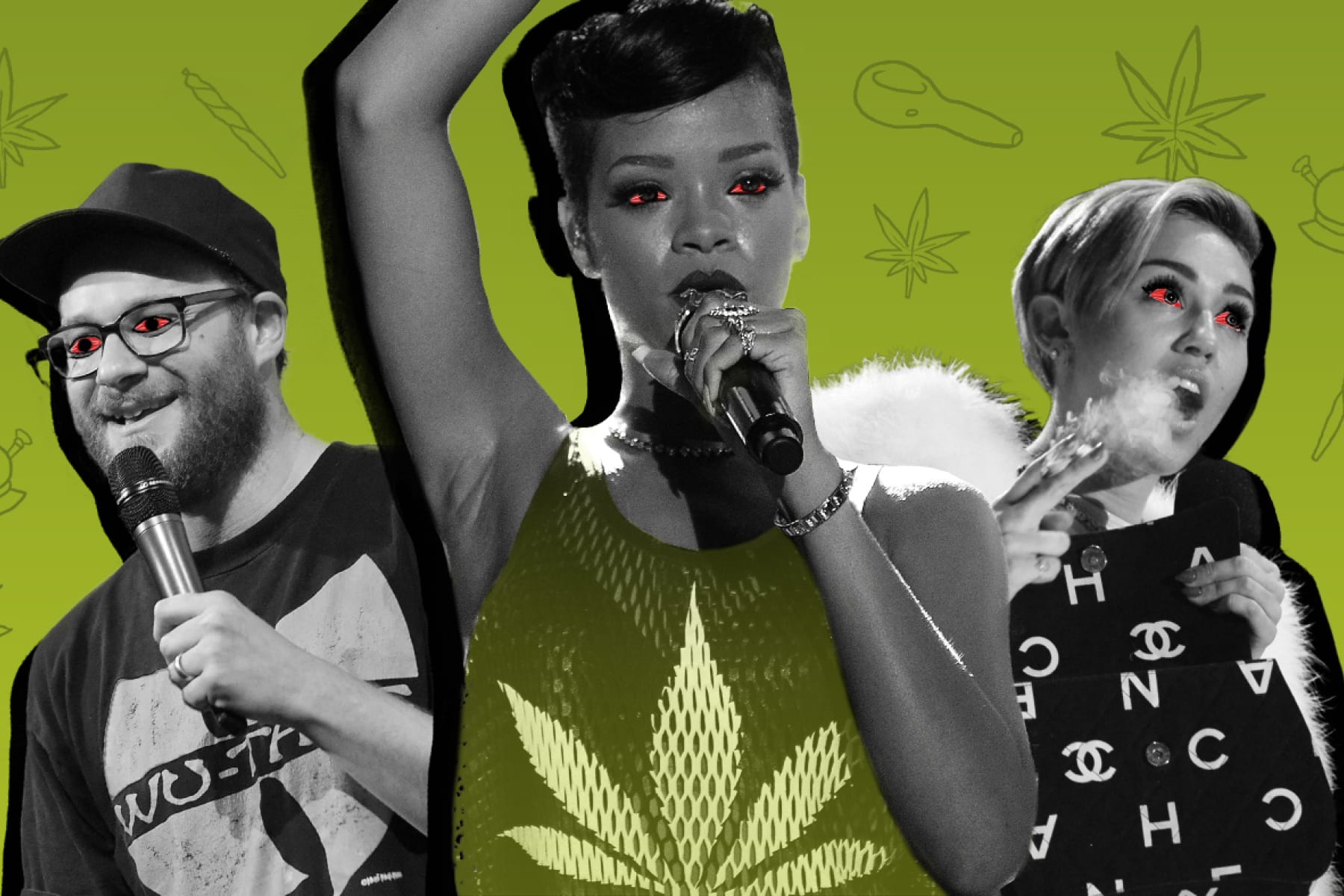 In 1970, Marijuana was given the strictest designation possible. In other words, it became absolutely illegal and had no identified clinical uses. For decades this view pushed back exploration of the drug’s beneficial mechanisms and effects.

Today, Marijuana’s health benefits are extensively acknowledged, and numerous countries have even legalized it for scientific use or are shifting in that direction.

A lot has changed since the ’70s, but one thing’s certain, Marijuana has become even more popular, and many celebrities openly talk about using Cannabis themselves. Here’s our list of the Top 10 celebrities who smoke Marijuana.

Who makes the list of the top celebrity stoners?

Back in 1981, Snoop was just a puppy when Bob Marley passed on rest his soul. Over the years he’s transformed into the greatest celebrity pothead the world has ever known. Snoop Dogg came to prominence in the early ’90s for his G funk music and weed persona.

With each passing year, Snoop Dogg has blessed us with poignant tales of weed and never stops amazing us with his passion and ability to smoke anyone out (except maybe Seth Rogen)

Snoop now owns his own weed brand “Leafs by Snoop” and has invested in California based weed delivery startup.

Master of the Iconic Voice Mr Morgan Freeman doesn’t need any introduction, as you can catch this ol’ boy toking freely in public.

This 79-year-old stud wholeheartedly favours the legalization of weed. As a victim of a fatal car accident that caused him severe nerve damage in his hand, Freeman claims that the only thing that offers him some relief is the regular use of Cannabis.

In 2015 Morgan Freeman actually told The Daily Beast that he’d eat it, drink it, smoke it and snort it, making him even more awesome.

Once a sweet little Disney star today, she seems to be a perpetually naked performer with an affinity for waking and bacon.

It’s true Miley Cyrus does enjoy a bit of Marijuana, and we know this because she likes to let the rest of the world know. You might say that she’s a modern-day prophet like Bob Marley only without the universally-loved music and humble persona.

This movie star has long been recognized for his healthy physique. One might not immediately associate him as being a massive stoner.

Pitt once told The Hollywood Reporter, “I was hiding out from the celebrity thing. I was smoking way too much dope I was sitting on the couch and just turning into a doughnut, and I got irritated with myself”.

Bill Gates, Another Tech-Giant, and the richest man in the world for many years, gates blazed a lot in college. His support for the legalization of weed in his home state of Washington is no big secret.

Moreover, His multi-billion dollar company Microsoft has partnered with a Los-Angeles based startup called “Kind Financials” that specializes in cannabis tracking and compliance.

According to Gates, he’s said: “Traffickers are going to make a lot less money, and the illegal drug trade will be avoided if we legalize marijuana.”

Well no Introduction needed for this mofo, as he’s dabbled with Marijuana many times before. His exact words are, “The only thing pot does for me, is it gets me to stop thinking. Sometimes I have a brain that needs to be turned off.

Some people are just better high.” Well, there you have it, word to the wise, keeping it classy Timbo. Basically, he was always turned up. An open supporter of marijuana legalization he became known for his early support of the National Organization for the Reform of Marijuana Laws and served on the advisory board.

Lady Gaga attended New York University’s Tisch School for the Arts but left to find creative expression. She’s been addicted to various things for since she was young. The most heavily over the past seven years and a friend gave her this term a lilypad.

She said that with Marijuana is the best of the drugs to choose from in terms when you’re playing around and experimenting. She has been addicted to it, and it’s ultimately related to anxiety coping, and it’s a form of self-medication. She was smoking up to 15 to 20 marijuana cigarettes a day with no tobacco.

Khloe Kardashian becomes protecting a marijuana joint in the latest episode of her clan’s tv display portraying their vacation in Costa Rica.

In a generally interesting instalment of Keeping Up With The Kardashians on Sunday, she becomes shown to protect a suspicious-looking cigarette in her hand as she enthusiastically embraced her sister Kourtney’s former lover Scott Disick. “She doesn’t smoke pot, or cigarettes smoked only Marijuana.

Besides Cheech & Chong, the comic most related to Marijuana is Doug Benson. He’s made a residing off his laid-returned stoner character for over a decade, on a level with “The Marijuana-Logues,” on the movie in Super High Me and at the small screen with his maximum latest venture, The High Court.

But Benson is likewise referred to as a comedy and movie fan. His “Doug Loves Movies” podcasts are recorded stay with a target market as he demonstrates the first-rate breadth of know-how about tv and movies.

Willie Nelson’s love of Marijuana has been widely known, but according to the musician “he’s given up smoking because of breathing problems”. The 86 year old musician who still performs live told Houston’s KSAT TV singing out there for an hour is a good workout your lungs are the biggest muscle you’ve got.

He continued “I’ve abused my lungs quite a bit in the past so breathing is a little more difficult these days and I have to be careful few months. he was convinced that Marijuana had saved his life-giving him an alternative to cigarettes. It also reduced his whiskey consumption I used to smoke 2 or 3 packs of cigarettes a day and drank whatever was there to drink.

Now you know the top celebrities who smoke Marijuana regular basis. Marijuana acts on the body’s cannabinoid system, which has receptors all over the brain and body. Molecules native to the body, called endocannabinoids, also act on these receptors.

Now that you know you are in good company but can’t spend bank on a crazy setup like these celebs, check out an online headshop like Everything for 420 for sweet deals on glass bongs and smoking accessories.