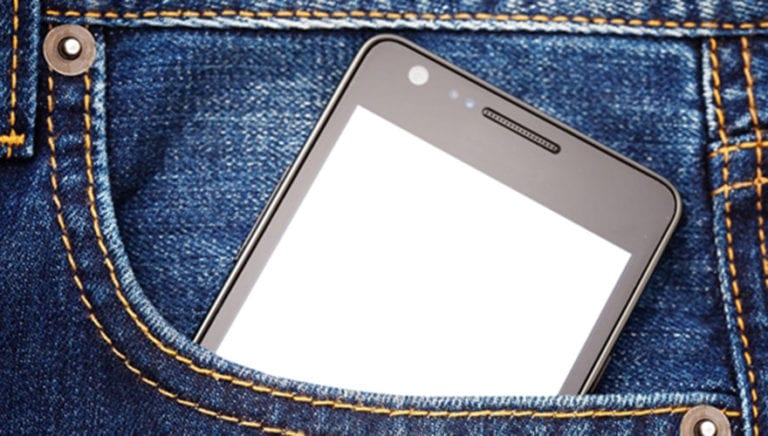 Is it Smart to Carry a Smartphone in Your Pocket?

When you think about it, you probably never return home when you forget your jacket or credit card, however, when you forget your smartphone, you most likely return home to get it. After all, we do live in the era of technological advancements, which is also why we choose to bring our phones with us wherever we go – and in most cases, we place them in our pockets.

However, is carrying these gadgets in our pockets wise? Could it actually do some damage to our overall health or to the device itself? Luckily for all individuals that are wondering about the same thing, the article below might shed some light on the entire topic. Let’s take a closer look at the reasons why you shouldn’t place your gadgets in your jeans or pants:

1. It Could Be Detrimental to Your Overall Health

One of the first reasons why you might not want to place your mobile phone in your pocket is because it could be detrimental to your overall health. Yes, they’re quite compact when it comes to their size, however, you should know that they’re packed with a lot of power, and that power is exactly what emits small amounts of radiation.

In a study conducted by a team of American scientists and specialists, it was concluded that continuously keeping your portable telephone in your pockets could cause some illness and conditions to develop, all of which could lead to dangerous and serious medical consequences.

In fact, it was revealed that it can cause a wide range of health problems including things such as heart illnesses and problems, infertility, different types of cancers, glioma, and so on. Additionally, some gadgets that are made from poor quality materials could overheat during summer days, which could lead to the device exploding, which is something that can cause serious harm.

2. Your Spine And Back Can Suffer Because of it

Although you might not realize this, putting your device in your back pockets can cause backaches and pain. it has been reported by various neurologists that there is an increase in the number of patients who come in and complain of aches and pain that begins in their buttocks and goes straight down to their legs.

There are various experts that believe that this is caused by placing them in our back pockets, meaning that the potential harm to the spine and back is obvious. Also, it’ll put pressure on the derriere, which is where the sciatic nerve is located, and it isn’t a good idea to damage this nerve.

According to the experts from texnologia.net, no matter how secure you think your phone is, accidents do happen quite often. And when you’re in a hurry or if you’re too busy, the device might fall out of your pocket. Besides breaking the gadget, you might also not notice that you dropped it, which is something that could lead to further problems.

If this happens, you’ll surely lose your phone, however, the bigger problem is that it contains all of your private information including your contacts, photographs, videos, messages, social media accounts, as well as banking applications. If in the wrong hands, someone could use this information to their advantage, while it might harm you.

4. You Might Forget About it And Sit on it

Besides dropping it, you could also make the mistake of sitting on it, especially if you forget that you have placed it there. Besides breaking your phone’s screen, you might also injure yourself in the process, which is also why you might want to avoid placing it in your jeans.

Now, as you already know – and should keep in mind all the time – if your device is a newer model or if it was recently released, it’ll definitely be expensive to repair it, hence, it might be best if you opt for keeping it in your purse or jacket, however, this is something that we’ll discuss later on in the article.

5. Your Sweat Could Easily Damage it

If you place your device close to your skin, it’s quite possible that that area of your body will produce more sweat than usual, which is especially true if you’re exercising, running, walking, or doing some physical tasks. Though quite logical, it’s still worth mentioning – any phone that is soaked into any type of liquid will probably get damaged.

Of course, the gadget won’t be entirely soaked into it, however, the sweat could still reach some important parts of it, which can cause it to malfunction. If the damage is minor, you should immediately turn it off and leave it for a few days to dry out and you could put it into a ball of rice that could get rid of the liquid. If the damage is extensive, it might be best to take it to a professional.

So, Where Should I Place it Then?

After all of the aforementioned things, you probably don’t want to put your phone in your pocket. However, where should you put it then? Well, for women it’s quite easier to make the change, especially since they always have bags and/or purses. But, people, more specifically men that don’t usually have bags could have a problem finding an alternative to putting their devices in their jeans or pants.

For example, men could choose to carry their phones in their laptop bags, however, if that is not an option, then it’s recommended that they purchase an e-Holster. What is an e-Holster? Well, it’s a non-pocket method for carrying your smartphone. Additionally, they could also opt for purchasing a case for their device, which will be functional, comfortable, and a great solution.

By now, you know that carrying your phone in your pocket is not wise, especially since there are various problems that it could cause. Besides causing back problems, it could also lead to the development of different illnesses and conditions, which is why you should choose a different option for carrying your device.

So, now that you’re aware of all the reasons you shouldn’t use your pockets for carrying your device, you might not want to lose any more of your time. Instead, you might want to do some digging, and determine what carrying method is the most suitable and desirable for you.